Rivals to send spacecraft to the red planet just days apart, as China seeks to challenge the U.S. on exploration

SHANGHAI—The rivalry between the U.S. and China assumes cosmic proportions this month, as both countries prepare to send spacecraft to Mars within days of each other.

The head-to-head Mars missions are the latest sign that China is ready to challenge the U.S. in space exploration, in recent decades an American preserve.

China’s first mission to another planet, the Tianwen-1 is set to blast off this week—the exact day has yet to be announced—on a seven-month journey to Mars. It will orbit the red planet for two to three months before deploying a rover that will conduct scientific experiments on the Martian surface.

The U.S. mission, due to launch July 30, will land the Perseverance rover on Mars. It will also deploy the Ingenuity Mars helicopter—the first craft capable of powered flight on another planet.

Chinese officials have framed space exploration as a contest between nations and sometimes likened the conquest of space to China’s territorial disputes here on Earth. 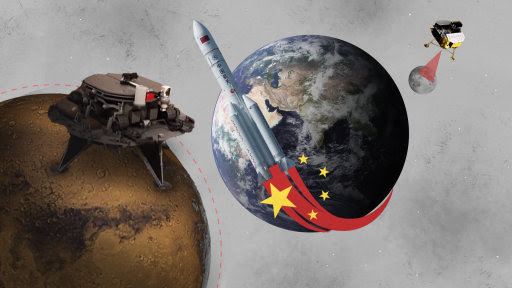 This summer the planets favorably align for spacecraft to reach Mars with the least amount of fuel. China is among the countries undertaking the mission while working on bigger ambitions that could one day challenge the U.S.’s leadership in space. Photo Composite: Crystal Tai

“The U.S. is clearly uncomfortable with the idea that China could overtake it in all manner of ways,” said Dean Cheng, a senior research fellow at the Heritage Foundation, a U.S. think tank. “It matters to the U.S. psyche that it stays ahead in space.”

President Xi Jinping has put China’s national space program at the heart of a quest for “great rejuvenation” after a century of perceived humiliation in which China fell behind the West. In a letter to Chinese space scientists published this year, Mr. Xi urged China’s space scientists to “achieve the early realization of the great dream of building a powerful space nation.”

China first put a man into space in 2003, more than four decades after Russia and the U.S., but since then its space program has steadily chalked up new milestones.

Last year a Chinese probe, the Chang’e-4, became the first to touch down on the far side of the moon. In June, China put the 35th and final BeiDou-3 navigation satellite into orbit, completing its homegrown rival to the U.S. Global Positioning System.

There have been setbacks, too: The failure of China’s new Long March 5 heavy-lift rocket during a 2017 test set back the country’s space program by a couple of years. But two successful flights in December and May suggest the rocket’s glitches have now been resolved. The Long March 5 will power this week’s Mars mission, and put a planned Chinese space station into orbit by 2022.

By 2030, China aims to have collected Martian rock samples and returned them to earth, and it wants a manned lunar base and the capability to send men to Mars by 2045.

The timing of this month’s launches is primarily dictated by the motion of the planets.

Every 26 months, the Earth and Mars swing relatively close to one another—if 34 million miles can be considered close—providing a narrow window for Martian missions. The United Arab Emirates also took advantage of the latest alignment by launching a Mars probe Sunday. The U.S. and Russia have launched multiple probes to Mars in the past, while Europe, India and Japan have also sent spacecraft there. 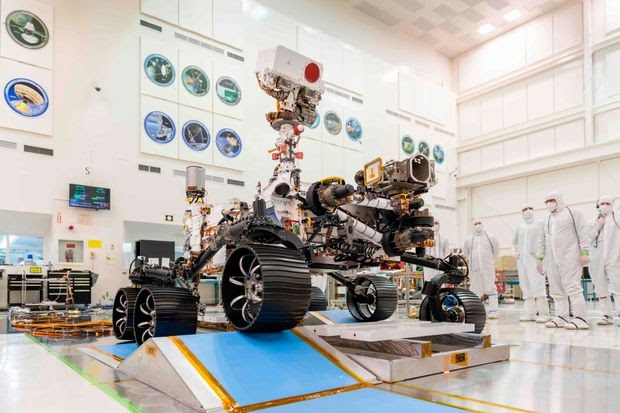 China’s one-party system provides a measure of certainty for the country’s space program, whereas National Aeronautics and Space Administration missions have sometimes fallen victim to shifts in spending priorities with new administrations. However, the U.S. has the advantage of a flourishing space private sector—led by companies such as SpaceX and Blue Origin—that China so far hasn’t been able to replicate.ADVERTISEMENT

The race to land astronauts on the moon is highly symbolic, said Mr. Cheng of the Heritage Foundation, with relations between the world’s two largest economies at their lowest ebb in decades as Beijing and Washington spar over issues ranging from technology and trade to the political status of Hong Kong and human rights in Xinjiang in China’s far west.

Last year, the U.S. created a military Space Force to counter space-based threats, chiefly from China and Russia. A Chinese Foreign Ministry spokesman said at the time that the U.S.’s new military branch would “pose a direct threat to outer space peace and security.”

Even though the U.S. won the original race to the moon long ago, it would be politically embarrassing for the U.S. should China be the first to get there in the 2020s, Mr. Cheng said. Likewise, either country faces humiliation should its Mars mission fail while the other succeeds.

Roughly half of the missions sent to Mars since exploration of the planet began in the 1960s have failed. Most recently, the European Space Agency’s Schiaparelli lander was destroyed when it crashed into the Martian surface in 2016, though the U.S. successfully reached Mars with its InSight lander two years ago.