As Hurricane Zeta churned toward the northern Gulf Coast today (Oct. 28), the International Space Station captured some incredible views of the massive storm from orbit.

The space station passed over Zeta just before 1 p.m. EDT (1700 GMT) as its external cameras recorded video of the strengthening hurricane. Now a Category 2 storm, Zeta is expected to make landfall in southeastern Louisiana this afternoon, according to the National Hurricane Center (NHC).

Syncronistic meetings are like mirrors that reflect something of ourselves. If we want to grow spirituality, all we have to do is take a good look. Synchronicity holds the promise that if we want to change inside, the patterns of our external life will change as well.

I do believe in an everyday sort of magic; the inexplicable connectedness we sometimes experience with places, people, works of art and the like; the eerie appropriateness of moments of synchronicity; the whispered voice, the hidden presence, when we think we’re alone.

Synchronicity explores Carl Jung’s concept of “meaningful coincidences” – events that occur with no causal relationship yet seem to be meaningfully related. Shot in busy public spaces, anonymous figures pass each other at a frenetic pace , blending into each other, and creating ambiguous new shapes. Past, present, and future overlap. Ghosts appear in the crowd. Patterns emerge from chaos.

SpaceX prices Starlink satellite internet service at $99 per month, according to e-mail

SpaceX is expanding the beta test of its Starlink satellite internet service, sending emails on Monday to people who expressed interest in signing up for the service.

Called the “Better Than Nothing Beta” test, according to multiple screenshots of the email seen by CNBC, initial Starlink service is priced at $99 a month — plus a $499 upfront cost to order the Starlink Kit. That kit includes a user terminal to connect to the satellites, a mounting tripod and a Wi-Fi router. There is also now a Starlink app listed by SpaceX on the Google Play and Apple iOS app stores.

“As you can tell from the title, we are trying to lower your initial expectations,” the emails said, signed “Starlink Team.” “Expect to see data speeds vary from 50Mb/s to 150Mb/s and latency from 20ms to 40ms over the next several months as we enhance the Starlink system. There will also be brief periods of no connectivity at all.”

The emails, sent to an unspecified number of users, marks the launch of SpaceX’s public beta test of the emerging internet service. For the last few months SpaceX has conducted a limited private beta test with employees — which the company has said showed strong results in both latency and download speeds, key measures for an internet service provider.

SpaceX did not immediately respond to CNBC’s requests for comment.

Those who received the emails would have filled out a form on the Starlink website, which asked for potential subscribers’ contact information and location. Elon Musk’s company posted that form in June and, less than two months later, SpaceX said that “nearly 700,000 individuals” across the United States had indicated interest in the service.

Starlink is SpaceX’s plan to build an interconnected internet network with thousands of satellites, designed to deliver high-speed internet to anywhere on the planet. The network is an ambitious endeavor, which SpaceX has said will cost about $10 billion or more to build. But the company’s leadership estimates that Starlink could bring in as much as $30 billion a year, or more than 10 times the annual revenue of its rocket business.https://53cd6e85feb269b70482a23c6a6123a1.safeframe.googlesyndication.com/safeframe/1-0-37/html/container.html?n=0 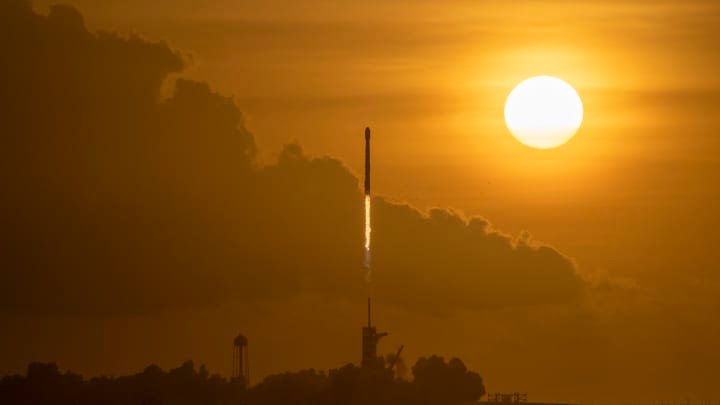 A Falcon rocket launches a Starlink mission in October 2020.SpaceX

To date, SpaceX has launched nearly 900 Starlink satellites — a fraction of the total needed for global coverage but enough to begin providing service in some areas, including in the northwest United States. The company has begun to work with a handful of organizations in rural regions that Starlink satellites in orbit currently cover, such as Washington state.

“Under Starlink’s Better Than Nothing Beta program, initial service is targeted for the U.S. and Canada in 2020, rapidly expanding to near global coverage of the populated world by 2021,” SpaceX said in the description of its Starlink mobile app.

SpaceX earlier this month announced a partnership with Microsoft to connect the tech giant’s Azure cloud computing network to the Starlink network. SpaceX and Microsoft in recent months have been testing the software needed to connect Starlink and Azure. The partnership is especially key to Microsoft’s new mobile data centers, which the company said are designed “for customers who need cloud computing capabilities in hybrid or challenging environments, including remote areas.”

TESS, the Transiting Exoplanet Survey Satellite, was launched in 2018 with the goal of discovering small planets around the Sun’s nearest neighbors, stars bright enough to allow for follow-up characterizations of their planets’ masses and atmospheres. TESS has so far discovered seventeen small planets around eleven nearby stars that are M dwarfs — stars that are smaller than the Sun (less than about 60% of the Sun’s mass) and cooler (surface temperatures less than about 3900 kelvin). In a series of three papers that appeared together this month, astronomers report that one of these planets, TOI-700d, is Earth-sized and also located in its star’s habitable zone; they also discuss its possible climate.

CfA astronomers Joseph Rodriguez, Laura Kreidberg, Karen Collins, Samuel Quinn, Dave Latham, Ryan Cloutier, Jennifer Winters, Jason Eastman, and David Charbonneau were on the teams that studied TOI-700d, one of three small planets orbiting one M dwarf star (its mass is 0.415 solar masses) located one hundred and two light-years from Earth. The TESS data analysis found the tentative sizes of the planets as being approximately Earth-sized, 1.04, 2.65 and 1.14 Earth-radii, respectively, and their orbital periods as 9.98, 16.05, and 37.42 days, respectively.

This illustration of TOI 700 d is based on several simulated environments for an ocean-covered version of the planet. Credit: NASA’s Goddard Space Flight Center

In our solar system, Mercury orbits the Sun in about 88 days; it is so close to the Sun that its temperature can reach over 400 Celsius. But because this M-dwarf star is comparatively cool the orbit of its third planet, even though much closer to the star than Mercury is to the Sun, places it in the habitable zone – the region within which the temperatures allow surface water (if any) to remain liquid when there is also an atmosphere. That makes this Earth-sized planet TOI-700d particularly interesting as a potential host for life.

The TESS detections were exciting but uncertain: the signals were faint and a small possibility remained that the TOI-700d detection was spurious. Because of the potential importance of finding a nearby Earth-sized planet in a habitable zone, the TESS scientists turned to the IRAC camera on the Spitzer Space Observatory for confirmation. Before being turned off by NASA in February 2020, the IRAC camera was by far the most sensitive near infrared camera in space.

A schematic of the planets around the nearby M dwarf star TOI-700, discovered by TESS. The third (the farthest planet from the star), TOI-700d, lies within the star’s habitable zone (shown in green). Using the IRAC camera on Spitzer, the team refined the planet’s mass as 2.1 Earth-masses and 1.14 Earth-radii. (The scale shows 0.2 astronomical units; AU being the average Earth-Sun distance.) Credit: Rodriguez et al 2020

The TESS team observed TOI-700 with IRAC in October of 2019 and January of 2020, acquiring clear detections of the planets with about twice the signal-to-noise of TESS, enough to give a 61% improvement in the planet’s orbit and to significantly refine our knowledge of its other characteristics, refining the radius as above and finding the mass to be 2.1 Earth-masses. The results, especially when compared with other planets’ properties, suggest that this planet may be rocky and likely to be “tidally locked” with one side of the planet always facing the star.

If there were liquid water on the surface of TOI-700d, the astronomers argue, there would also be water-bearing clouds in the atmosphere, and the team uses climate system models to estimate its possible properties and what more sensitive measurements might find. They conclude, however, that pending space missions, including JWST, will probably lack the sensitivity to detect atmospheric features by a factor of ten or more. Their detailed climate studies will nevertheless help astronomers constrain the kinds of telescopes and instruments that will be needed to investigate this exciting new neighbor.

The concept engine is twice as efficient as chemical rockets

Seattle-based Ultra Safe Nuclear Technologies (USNC-Tech) has developed a concept for a new Nuclear Thermal Propulsion (NTP) engine and delivered it to NASA. Claimed to be safer and more reliable than previous NTP designs and with far greater efficiency than a chemical rocket, the concept could help realize the goal of using nuclear propulsion to revolutionize deep space travel, reducing Earth-Mars travel time to just three months.

Because chemical rockets are already near their theoretical limits and electric space propulsion systems have such low thrust, rocket engineers continue to seek ways to build more efficient, more powerful engines using some variant of nuclear energy. If properly designed, such nuclear rockets could have several times the efficiency of the chemical variety. The problem is to produce a nuclear reactor that is light enough and safe enough for use outside the Earth’s atmosphere – especially if the spacecraft is carrying a crew.

Elliott’s monologue in eXit is incredibly powerful talking about the power of love overcoming all obstacles, challenges and healing power. Beautiful.

The problem with the world is that the intelligent people are full of doubts, while the stupid ones are full of confidence.