California Health and Human Services Secretary Dr. Mark Ghaly announced Tuesday four more counties have moved into the purple tier, bringing the total number of purple counties to 45. Two weeks ago, there were only 13 counties in this most restrictive level, which requires many indoor businesses, such as restaurants, movie theaters and museums, to close.

There was concern San Francisco could move from red to purple, but the city held onto its red status this week, and the other eight Bay Area counties didn’t see any movement.

“I think each county has a slightly different story,” said Ghaly. “Just a couple weeks ago, San Francisco was in the yellow tier. Make no mistake, they’ve seen a significant surge in cases. We believe some of the tools they’ve put in place will be helpful. We hope to see them hold steady where they are, but we need to prepared for them to not. I do commend them for continuing to sound the alarm and communicate effectively.”

Colusa, Del Norte, Humboldt and Lassen regressed from red to purple, while Calaveras went from orange to red. The only two remaining counties in the least restrictive yellow tier, Mariposa and Alpine, jumped back to orange. 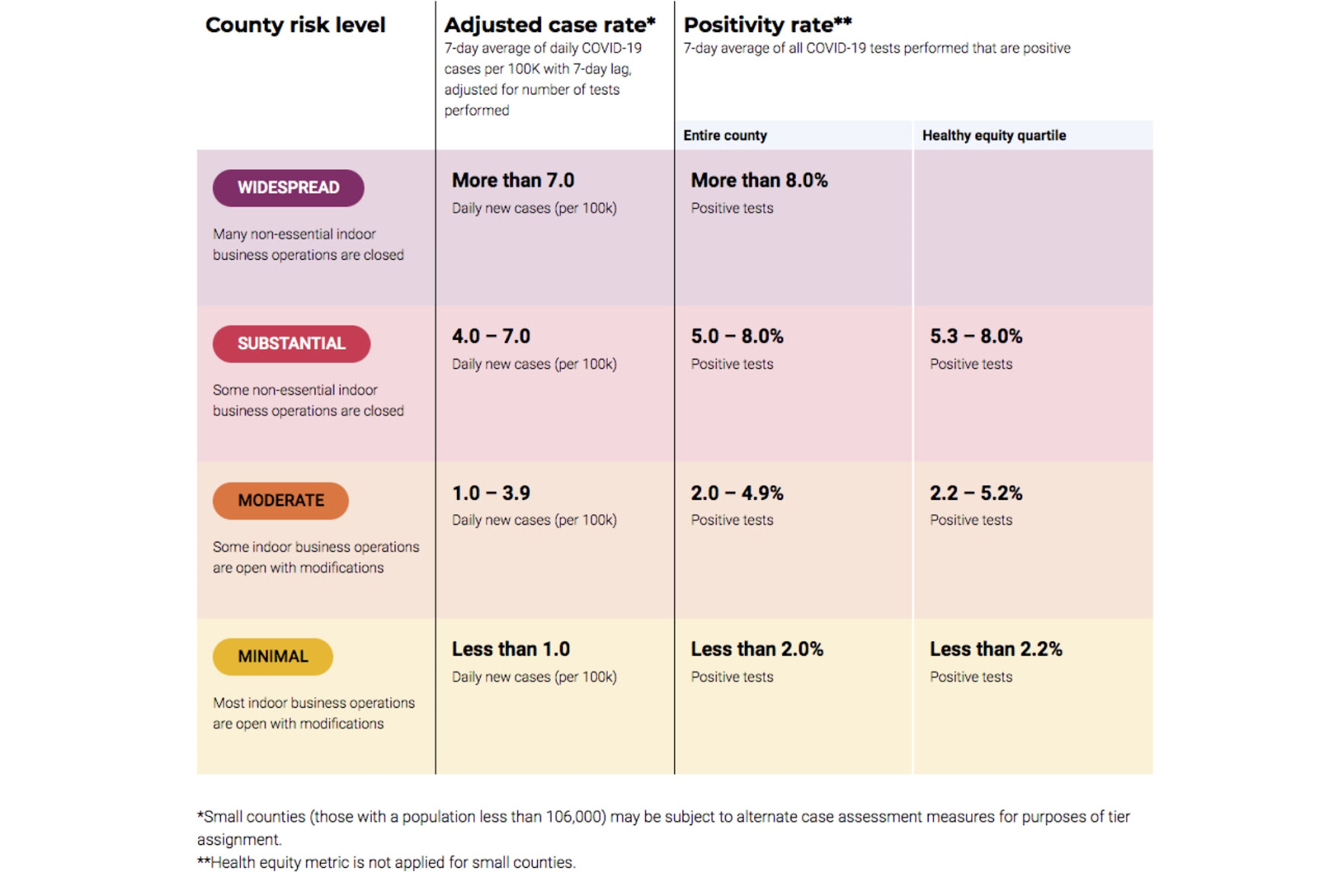 California’s reopening plan is dictated by four color-coded tiers. Each county is assigned to a tier based on its test positivity and adjusted case rate.

The state’s system sorts counties into four tiers — “purple” (widespread), “red” (substantial), “orange” (moderate) or “yellow” (minimal) — that measure the spread of COVID-19, and dictate what types of businesses and activities are allowed to open. The structure allows counties to be more restrictive and move more slowly than the state in its reopening, if they wish.

A county’s tier assignment is based on two key metrics: the case rate (number of new cases per 100,000 residents) and the positivity rate (percentage of people who test positive for the virus of all individuals who are tested). A health equity metric is also part of the equation, but only comes into play to help a county move to a less restrictive tier.

Last week, the state called on purple tier counties to implement a curfew.

The “limited stay at home order” calls on nonessential work and gatherings to stop from 10 p.m. to 5 a.m.

During the overnight period, people can still go to the grocery store or a drugstore, walk their dog or get takeout from a restaurant, Ghaly said. You can also go outside with members of your household as long as you’re not gathering with others outside your household.

The intention of the curfew is to curb rising cases and prevent a situation where a more extreme lockdown is necessary.

In the purple tier, the state allows hair salons and barber shops to remain open indoors. Retail including shopping malls can be open at 25% capacity.

In the past, a county moved backward by failing to meet the criteria for two consecutive weeks, but last week the state announced counties will now move back into a more restrictive reopening tier after one week of data that doesn’t meet standards for being in a lower tier.

The state is now requiring counties that move back to close required business sectors within 24 hours, rather than three days. A woman jogging in Golden Gate Park runs past signs reminding people to social distance and wear masks in San Francisco on July 28, 2020.

Ghaly also provided a sobering update on the state’s current COVID-19 data that continues to show an alarming upward trend.

The state reported 15,329 new cases Tuesday, nearly the highest daily case number since the start of the pandemic.

Hospitalizations are up 81.3% across the past 14 days, and the number of patients in intensive care units up 57.1%.

On Nov. 1, there were 2,537 people hospitalized with COVID and on Nov. 23 there were 5,844. “When you see these numbers doubling, that’s cause for concern,” Ghaly said. “Hospital systems are stretched.”

Ghaly said the good news is that the state continues to do a lot of testing and on Tuesday reported 283,819 tests, marking a new one-day high.

The press briefing on Tuesday ended with Ghaly calling on California residents to stay home on Thanksgiving and keep any gatherings small, short and outdoors with masks and social distancing